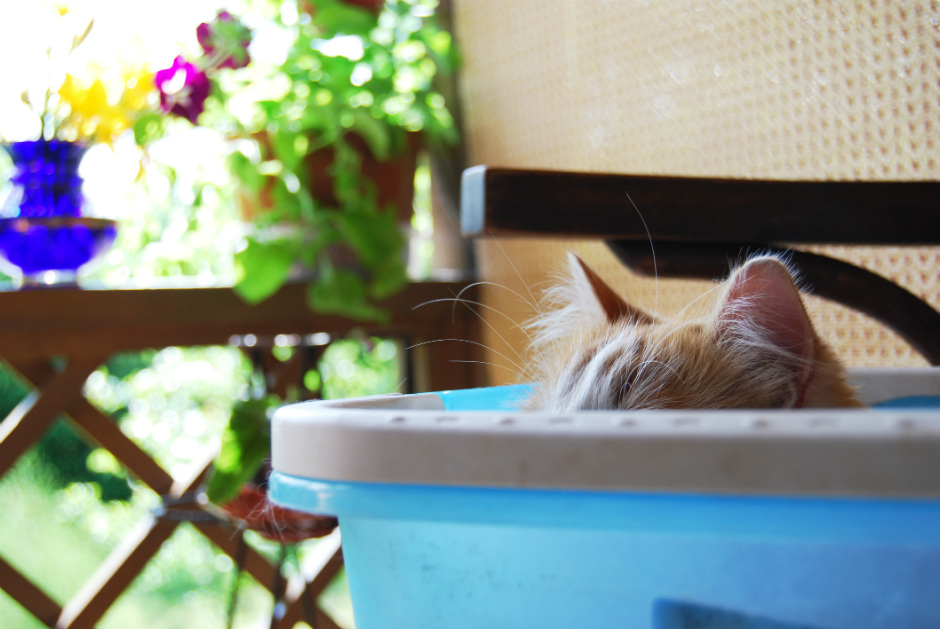 Cats are solitary hunters, and injury can seriously compromise their ability to feed and survive. In addition, due to their small dimensions, they can be prey for larger animals themselves. This explains their special sensitivity towards possible threats that can be represented by strange noises, new smells, unfamiliar objects and the presence of new animals or individuals in their space.

In fact, cats prefer to move in a predictable and familiar environment from the physical and social point of view, in which they can hide if they are in stressful situations or when they want to avoid interaction with other cats, animals or people (Carlstead et al. ., 1993). The feeling of control over adversity and the possibility of anticipating what is going to happen, especially when it comes to something unpleasant, are essential to reduce their stress levels and improve their ability to adapt to the environment (Herron and Buffington, 2010; Rochlitz, 2005).

They should be provided with places, in different parts of the house, where they can hide especially in quiet and sheltered spaces. They can be cardboard boxes, an open carrier, baskets, a cat tunnel, an open closet, the space under a bed, above a closet or sideboard, etc.

Tips # 1. Although many cats tremble upon seeing it, an open and well-placed carrier inside the house can become a safe hiding place for them. This sense of security can help reduce the cat’s stress level even when the carrier is used to take it to the vet (Ellis et al., 2013).

Some hiding places should also be raised off the ground, since taking refuge high and controlling the situation from above is another adaptive strategy of cats that are naturally climbers. To develop the vertical dimension of the house you can place cat trees and shelves, leave window shelves or the upper part of bookcases and furniture in the house, etc. at the cat’s disposal.

In addition, it is important to worry about how to facilitate the cat’s access to these places, organizing ways to get on and off, for example, placing a piece of furniture at half height or fixing a piece of carpet or carpet to the wall so that the cat can climb it. In the case of kittens or older cats with mobility problems, the places raised off the ground should be placed lower or have access ramps.

Tips # 2. Cat shelves should be sized appropriately to allow the cat to fully stretch out (Ellis et al., 2013).

Tips # 3. Developing the vertical dimension of the house not only serves to provide the cat with safe areas and observation points in the environment, but is also a fundamental measure to stimulate the cat’s physical exercise.

On the other hand, for the hiding place to help the cat relax, it is important that it is a safe and private place. This implies that the cat should be able to take refuge there by itself and feel safe when it is inside. The hiding place should be protected from other individuals, be it other cats, dogs or even children in the house. The cat should never be disturbed once it has taken refuge in its hiding place.

In addition, the hiding place should always be available to the cat so that it can take refuge there when it needs it (Herron and Buffington, 2010).

Tips # 4. For the cat to feel safe, the hiding place does not necessarily have to cover the entire body of the cat (Ellis et al., 2013).

A safe hiding place can also serve as a resting place, especially if it is raised off the ground and offers the cat a vantage point.

In addition to hiding places, cats should have escape routes available to move safely within the home. From the cat’s perspective, these routes can include both routes on the floor, for example behind a sofa, and on top of furniture. The possibility of fleeing helps the cat to know that it can take refuge in a safe area and in some situations it prevents it from resorting to aggressiveness to solve conflicts with other individuals in the house (Ellis et al., 2013).

In houses with several cats

If several cats live together in a house, taking care of the privacy and security of the environment is especially important, since not all cats that live together form emotional bonds between them.

For example, some only come to tolerate the presence of others in their territory. For this reason, it is important to ensure that in common spaces cats can maintain a distance between them of at least 1-3 meters, both horizontally and vertically (Barry and Crowell-Davis, 1999).

Also, although some cats rest and sleep together, most prefer to do it alone. It can also be that the same shelf, hiding place or bed is used by several cats at different times of the day (Bernstein and Strack, 1996).

So to avoid competition for the same space, it is very important to leave many safe and comfortable places to rest in different parts of the house available to cats (Herron and Buffington, 2010). Each hideout should also have more than one entrance to prevent a cat from being blocked inside by another cat just outside the entrance.

Tips # 6. Cats have a past as solitary animals and even those who live in groups spend much of their time alone and there are times when they prefer to isolate themselves from other individuals in the house (Barry and Crowell-Davis, 1999).

Tips # 7. Placing panels, curtains or other types of separation can help cats to “isolate” themselves from other animals present in the environment (Rochlitz, 2005).

As much as possible, your space should be free from stressful or scary situations. This means, for example, that, if there were cats outside the house, it would be important to cover the points from where the cat could see the neighborhood cats, especially in the most intimate parts of its territory.

If it is not possible to create a stress-free environment, it is important that the cat has the possibility of exercising a certain level of control over the environment, implementing strategies that allow it to protect itself from what is bothering it (Broom and Johnson, 1993) and , being the fact of hiding one of the most commonly adopted among cats.

In some cases, more complex shelters than a simple hiding place can be organized, leaving the cat also with food, water, a tray, scratchers, toys, shelves and a bed in its safe area (Overall et al., 2005). A safe haven could even be an entire room. In this case, putting a cat flap that can be opened with an individual chip could allow access only to the cat that has the chip on its collar and exclude the other animals in the house (Herron and Buffington, 2010).

When the environment is a source of stress for the cat, there are other measures that can be implemented. Ask your trusted veterinarian for advice on what else you can do. Keep in mind that there are veterinarians who specialize in behavior, called ethologists, who can be of great help to you and your cat.

Cats are routine animals. A consistent and largely predictable environment is the starting point for organizing a space to suit you (Herron & Buffington, 2010). However, although the routine has a calming effect, a monotonous environment and without any interesting news, it can also become stressful and can significantly reduce the level of activity of cats (Van Rooijen, 1991; Kessler and Turner, 1999 ).

As a general rule, the environment should be highly predictable, especially when the cat is adjusting to some change, for example, when it has just been adopted or another member of the family has just joined. After the cat has adapted, some degree of complexity and reduced predictability can be beneficial, especially when introducing positive novelties (Bradshaw et al., 2012). On the other hand, it is preferable that negative events remain predictable (Bassett and Buchanan-Smith, 2007).

Something unforeseen from time to time can satisfy the natural curiosity of cats. But remember that not all cats react in the same way to novelties, even when they are not negative situations: individual temperament (Lowe & Bradshaw, 2001) and the cat’s past experiences can make a difference. So when something new is introduced, do not exaggerate and you have to give the cat the possibility to decide how to deal with them (Rochlitz, 2007).

Tips # 8. Cats are not fond of unpleasant contingencies such as contact with people, unfamiliar cats, or some manipulation (Carlstead et al., 1993).

Changes in the environment can be another source of stress for cats, such as using another type of litter or changing the arrangement of the furniture. When it comes to a change in one of the cat’s resources, it is important to check its preferences before starting it permanently, so if you want to try another type of sand, it is preferable to place a tray with the new sand at the side of the tray with the previous litter and write down the cat’s preferences. Their tastes should guide the choice of resources, since imposing a resource that the cat does not like could be a significant source of stress (Herron and Buffington, 2010).