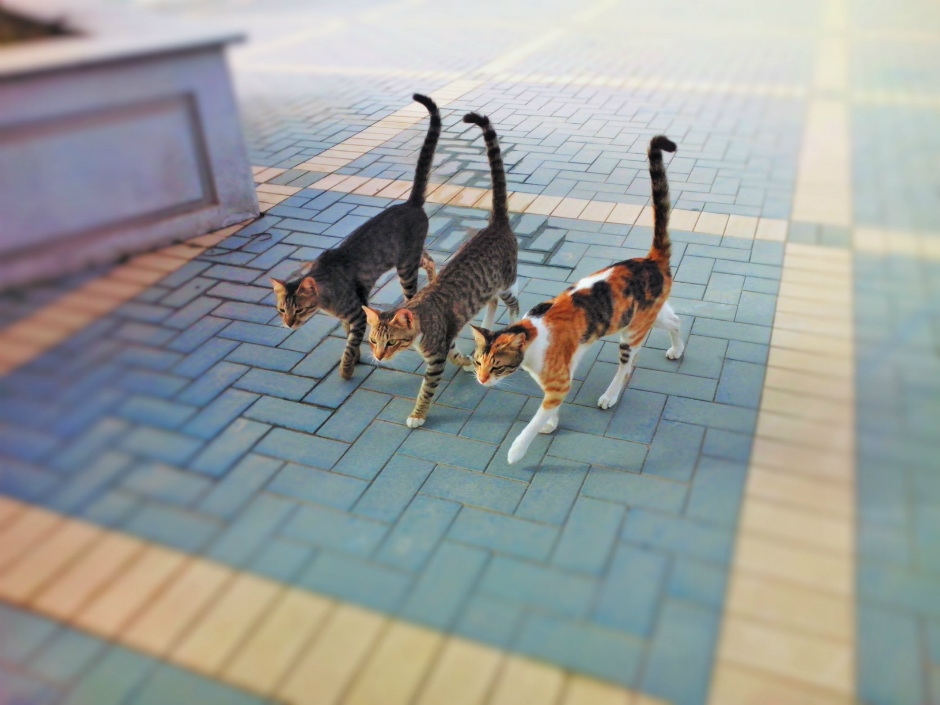 Although we are more used to cats as pets, the reality is that in Spain there are thousands of felines that live on the street. But what do we know about them? Are they happy living in freedom? Are they a benefit to society or a source of conflict?

In summary, stray cats, although they can involve some inconveniences, are part of our environment and provide advantages to our society. The key to a good coexistence between humans and feral cats consists of proper colony management, that allow their existence, with the highest possible quality of life and without causing problems in the environment.

The Stray cats, technically called “feral” cats, are those that live in freedom, who are used to that lifestyle, and that, therefore, they could hardly live happily as pets locked in a space totally controlled by human beings.

Another case is that of domestic cats, which are adapted to living as pets and to be controlled by a person, as long as their welfare needs are covered.

In fact, Feral cats are rarely found in an abandoned animal shelter, unless they are sick and need special care. In general, in a shelter or shelter you will find cats that are used to being companion animals and that have been abandoned by their owners. These characteristics make it very difficult for them to survive in full freedom.

On the other hand, it can be thought that the life of a stray cat is much fuller than that of a household cat. However, keep in mind that feral cats tend to live more precariously than purely domestic cats, since they are usually without protection against diseases, inclement weather or food shortages. In consecuense, it is difficult for a feral cat to exceed 10 years of ageWhile a cat under the care of a responsible owner can easily turn 15, or even 20.

An interesting point of the life of the stray cat is that they are usually structured in “colonies”This means that many of them live in groups and located in a very specific territory, where they have their spaces to shelter and power sources within their reach. It is therefore that many animal protection entities are dedicated to the management of these feral cat colonies, offering them food and placing huts that serve as a refuge to give them a better quality of life. In addition, to prevent cat colonies from becoming a public health problem and for coexistence with people in the community, these entities, such as Progat, Silvestre Foundation or Cat platform, They are dedicated to sterilizing them (thus avoiding uncontrolled reproduction), and to doing health monitoring.

Now it is true that if cat colonies are not supervised they can become a problem in the community, since cats reproduce in a massive way and the population could grow indefinitely. And that growth could lead to public health and even ecological problems, because they could harm populations of other wild species, especially birds.

On the other hand, it must also be taken into account that the existence of stray cats, in fact, offers benefits to the community, since it prevents other animals from spreading in our environment such as mice or rats.

Specifically, this year, the city of New York decided to launch a campaign in favor of feral cats, since the previous policy in this city of eliminating these animals from the streets only made the city plagued with rats. For this reason, now they want stray cats to be in the city again, supervised by entities that manage the colonies, and thus be able to control the plague of rats in a natural way.

So that, the presence of stray cats in the environment can be beneficial, as long as it is done under the strict control of professionals with knowledge on how to manage colonies.

What should we do if we find a cat in the street?

First, we must avoid the initial impulse to take it home, since we could be removing an animal from the environment in which it is adapted and to which it belongs. But it could also be a cat abandoned by its owner that really needs human care. Only if we detect that it is in poor health can we consider rescuing it to prevent it from getting worse. Anyway, if you have any questions, we must always contact the corresponding City Council, since the management of cats found in the street is the municipal responsibility. If not, we can also contact the animal protection entities in the area, who know the mechanisms of action and who, above all, know how to identify when it is a feral cat or a companion cat, the latter needing to be rescued, already that it will be difficult for him to survive in freedom.

Nor should we uncontrollably feed a colony of feral cats, since we could cause hygiene problems in the area and be offering resources for other animals to approach. If we identify an area where there is a colony, again, the recommendation is to go to the local authorities or animal protection entities, which will apply the most convenient strategies to manage it.

By last, We must also bear in mind the cases of poisoning and mistreatment of feral cats that occur because, often, some residents of the area do not agree with the presence of these animals.

First, It is important for the community to recognize the benefits of the presence of stray cats in terms of pest control. Second, if we detect that there is this danger for cats, the animal protection entities in the area usually know the administrative and legal mechanisms to act in these cases. Further, In many autonomous communities, this type of action against feral cats is considered acts of animal cruelty and can be reported as such.

In summary, stray cats, although they can involve some inconveniences, are part of our environment and provide advantages to our society. The key to a good coexistence between people and feral cats consists of proper management of the colonies, which allow their existence, with the highest possible quality of life and without causing problems in the environment.